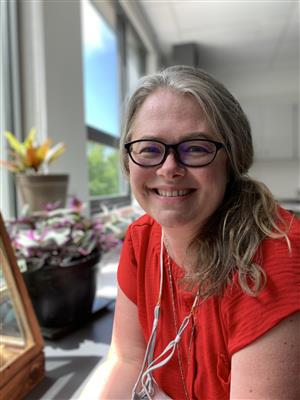 Einstein Middle School Science Teacher Colleen LaMotte is one of just six Washington teachers to be selected as national finalists for the Presidential Award for Excellence in Math and Science Teaching (PAEMST). First established by Congress is 1983, the program recognizes exemplary teaching in the science, technology, engineering, and mathematics (STEM) fields in K–12 classrooms. The PAEMST is the nation’s highest honor for K-12 STEM teachers, recognizing those who have both deep content knowledge of the subjects they teach and the ability to motivate and enable students to be successful in those areas.

Her nomination and finalist selection process began when a colleague nominated her for the prestigious award. The nomination was then approved by the PAEMST team at the Office of Superintendent of Public Instruction and LaMotte was invited to complete the lengthy and in-depth application process. This included recordings of her teaching and written narratives and supplemental highlighting her mastery of effective teaching.

“When I opened my email and saw the notification that I was selected as a finalist, I was stunned honestly,” said LaMotte. “I am so incredibly honored by my nomination, colleagues and families willing to write on my behalf, and the overwhelming support of my colleagues… I firmly believe that I’ve been able to reach this level because of all those who’ve supported me taking risks, attending professional development offerings, sharing my thinking, questioning me, and being there to encourage me when my pedagogical risks didn’t turn out as planned.”

LaMotte extends that same level of support to her students. “I love listening to students talk and lead their own learning, and being witness to the rich and complex thinking students possess,” said LaMotte “I get great joy when students grow in their ability to take academic risks that push their thinking forward… I am honored to watch as students gain confidence and internalize the truth that science belongs to all of us.”

Recipients of the PAEMST will receive: